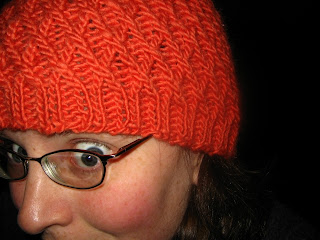 Well, I have been extremely busy since I last posted!! I quit Starbucks and have decided to substitute teach as much as humanly possible in addition to my one day a week counseling job!! I actually really do like it!!
I also have been working on getting down the weight and have been exercising at least three times a week since New Year's AND I am watching what I eat and trying to do it without going back to WW's. I do like the program...and have a feeling I will be back but right now I'm working on getting my life in order enough to have a bit of a routine and the way I'm working through it now is getting me to that point...hopefully!! But really only time will truly tell!!!
I also have been knitting up a storm and here are some pictures of my finished Christmas gifts...some were finished slightly after the Holiday....but here they are in all of their fully finished glory!! 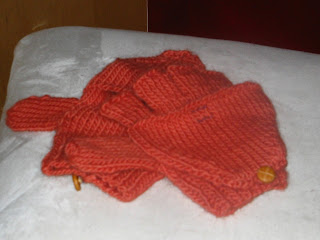 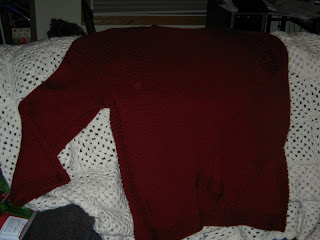 It's been a busy month and half....not a whole lot of exercise transformation going on. BUT, it is still on my mind and I DO have a goal that I am determined to achieve. The thing is, I have a whole gaggle of goals that I have been striving to achieve. First, I want to establish myself as a full-time, salarly-based, Monday-Friday school counselor. Second, I want to stop working in jobs that I am overqualified for. WHERE is the thrill or challenge in that? Third, I want to hand-knit 90% of my Christmas gifts this year.
So, there you have it folks, the goals that have usurped my ultimate goal of losing weight and running a 5 or 10k. But, on the upshot, I have made progress. I am extremely proud to announce that I have quit my job for which I am grossly over-qualified!!!! No more slewing coffee for people that have WAY more money than brains!! As of December 28th I am freed from the shackles of the coffee industry and this time for GOOD!!! Three rounds is quite enough for me...THANK YOU very MUCH!! As for a permanent position...still working toward that. But I am substitute teaching which is in fact providing me with a great number of challenges!! Yeah me!! I'm growing and learning how to manage kids!!! AND as for the Christmas gifts...well, in short, I shouldn't be typing if I expect to get ANY of them done in time....so with that..I shall go. But I will post pictures once these gifts are finished!!!
Posted by Monacular at 10:17 PM 2 comments:

Right...so starting my week of exercise and diet/transformation on a week that would end with a birthday celebration...I could have made a better choice if I were to ease into this whole change. I did not lose or gain a single pound this week. To add to it, I'm working my way through the monthly bloatfest. As a result, it could be worse..I could have gained a great deal and NOT exercised at all during the week. Which I did manage to work out three days out of the week. This week I'm shooting for four. I have one under my belt and I'm raring to go for a run tomorrow! Which means I have to go to bed now if I'm going to get a run in before my mom gets here to spend "quality time" with me for the day.
Which means...until next week....good-bye.
Posted by Monacular at 10:41 PM No comments:

Here are the "Before" Pictures

Alas, the long awaited pictures!! This is incentive enough for me to not look like this in pictures..now that I know they are out there on the information superhighway. Well, here it goes...I will be updating my progress pictures monthly.
And, I am happy to report that I have finished two projects since Sunday!! Wahoo! I might actually get all of my holiday knitting accomplished!! The mittens for my brother's girlfriend are done..AND the stash buster rug only a mother could love was completed last night!!! Now I just have Dad's sweater, Shawn's sweater, Melissa's felted bag, three baby gifts, the other sock, my brother's Moc Socks.....well, at least I have TWO done!!! Yeah..it feels so good to transition a UFO to a FO!!

Okay, I did take pictures of my day one...and the WILL be posted soon!! I just need to actually download them into the computer...so maybe tomorrow.
Since I know people do actually read this...probably more in passing than anything, I'm going to take a minute and feel sorry for myself on this blog. Not about the weight loss/exercise thing...I'm excited about that! The thing that gets me is how everything tends to build on itself.
For example, I know that with my exercise routine/weight loss I'm going to feel physically better and then I will start looking better and then, as a result I will start feeling more confident about myself and better overall about who I am as a person, and as a result I will be able to relay that to potential employers that will actually pay me to work fully within the career that I have been trained for and I will be making actual money, (not$ 10.00hr) and then I will actually be able to pay off my credit cards and not go in the hole every time I try to pay my bills and.....Yes, that DID feel good to get off my chest.
The more I live the more I truly realize that life is really something that needs to be constantly put into perspective. That helps me to enhance my outlook on life.... now to find a REAL job to start this ball rolling!!
Posted by Monacular at 8:43 PM No comments:

Okay, I have decided that enough is enough! I'm tired of being so tired all the time and I really DO like form-fitting clothes which, in all honesty don't look great when you have a belly and back flab. But more than cosmetically, I really enjoyed the way I felt about myself after dropping 25lbs over a year ago. 15lbs. later I want that confidence back. AND I am going to get it!!! After my September physical, (weighed in at 207lbs.) my doctor informed me that by my next physical she would really like to see me 55 to 60lbs lighter. I haven't weighed that since EARLY high school! So, I struck a deal with my father that if I lose 45lbs by next September, he will finance a weekend retreat to Bayfield, WI. His concern is the genes he and my mother have passed on to my sister, brother and I, and as a result he is gung-ho about weight-loss and will invest in a plan at every angle.
All that said, I have set a goal for myself and anyone who reads this can join in the fun! I will be able to AND run a 5k by June 2008. My sights are set on Grandma's Marathon 5k....not the marathon..not this year at least.
I will be weighing in every Monday and blogging my progress. Here are the vital stats:
Height: 5'5" Weight: 203lbs

I will add a before picture later today...and post a progress picture of myself monthly.
And....I'm OFF!!!!
Posted by Monacular at 7:39 AM No comments:

Well, the summer is over half over and I have not secured a REAL job for the next school year. I'm trying not to get down about it, but it isn't easy. I just don't want to be stuck at Starbucks my whole life and I am so ready for that change...but my lack of in depth experience makes me less desirable than I want and it just keeps that vicious cycle going because if nobody takes a chance on me, how else am I supposed to gain experience? I mean this experience stuff doesn't just come out of thin air...though I wish it did. I DO have experience and I know how to be an excellent counselor AND I'm passionate about it, I guess I just need more....but where do I get it if I can't get it from the job because they want me to have more experience?? Ugh, the frustration!
Posted by Monacular at 10:10 AM No comments:

Monacular
I am fun loving and energetic! I love meeting new people that share the same interests as I do. 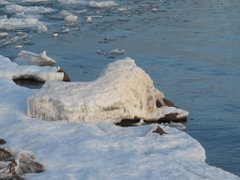 On the shore of Lake Superior 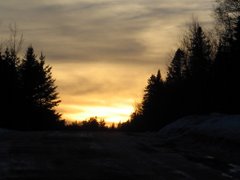 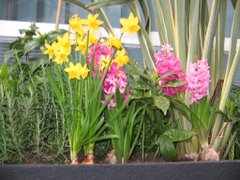 a collection of some of my favorites!